What do the National Football League, the Ferguson Police Department, and the United States Congress have in common? Not a hard question, it is the lack of Decision-Making Ability.

In my experience, it is not uncommon for government officials, business executives and people in decision-making positions to delay making a decision. Many never seem to have enough information, they need more data, or worse, they need more time. They are on a quest, “The Quest for the Perfect Decision. “ They are caught in the iron grip of fear.

Being decisive is second nature for effective leaders. They have a process and understand that decision-making is a never-ending cycle. Decisions, all decisions, carry with them unintended consequences. Once a decision is made, the process continues. It is a loop. It is known as the “OODA-Loop.” The model was developed by an Air Force pilot and is used throughout the U.S. Armed Forces. 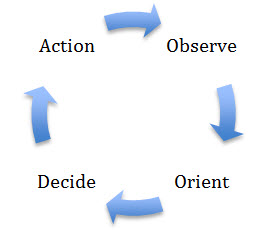 Using a model for decision making and understanding there is no such thing as a perfect decision the ability to make decisions should improve—right? Sadly, that is not the case.

Decision-making is a process. It requires having actionable information in order to develop viable alternatives. Those alternatives must be weighed against the must haves, wants, and risks. Accomplishing that you are left with the best decision based on the business need for an action.

The NFL, Ferguson Police Department, and the U.S. Congress are facing a similar situation. Each has their back against the wall of public opinion. Each has a need to make sound decisions. Each is in need of a process for making their decisions. It is evident neither has a process.

As a young Marine Officer it was drilled into us that lack of decisiveness that is delaying a decision or worse, not making a decision can be catastrophic to the unit.

As we see playing out in the media, lack of a good decision-making process, leads to decisions that are as bad as making no decision. Reputations are damaged. Veracity of talented leaders, owners, law enforcement officials and government representatives are in question.

What is your decision-making process? Talented leaders fail every day; businesses collapse for lack of one. Don’t be the next great public failure.