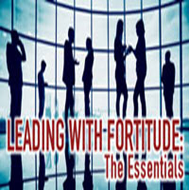 In my eBook, “Leading with Fortitude – The Essentials,” the first chapter spoke to the importance of your character. If you have not had the opportunity to read “The Essentials,” I highly recommend it.

Leadership is ALL ABOUT YOU! After all, being a leader is cool. The leader has an excellent office, flexible hours and a great car, which, in some cases, includes a driver. Now that is cool!

I was one of the few who did not think of the duty as a chore that kept me away from home all night. Although the responsibilities required regular tours of the Battalion Area keeping one away from a good night’s sleep, it did not bother me. Instead, I imagined how cool it was to be the Battalion Commander. You might say I had a vivid imagination. I would go so far as to take what little catnaps I could get in the Battalion Commander’s Office. I would sit at his desk and imagine being in-charge of over 900 Marines with enough firepower at my fingertips to resolve any issues questioning America’s might! Yes, I was in-charge, and it was cool!

Almost 20 years later as the Battalion Commander of an Infantry Battalion, I felt my thoughts about being the leader were validated. I was the leader, and it was cool! I had the corner office, not quite like that of my business counterparts but by Marine standards, it was the coolest office around. I had the vehicle and a driver. No one questioned the various times when I would come into or leave the office.

Being the Battalion Commander, as being a senior executive in the private sector, is demanding. As the real life Battalion Commander, I was up by 4 a.m. to begin my day with physical fitness training. I was showered, shaved, dressed and off to view training by 6 a.m. I was walking around the Battalion Area to say “good morning” to whomever I saw, and stop by the “Sick-bay” (medical building) to check on how many were ill that day. Or meet up with my driver for a 40-minute drive to attend an early morning meeting. And, of course, from time to time, I departed early to attend planning sessions for upcoming events; often not getting home until 9 p.m. or later. Upon retirement from the Marine Corps, I found leadership positions to be as demanding in the private sector. The demands on leaders are never ending.

The senior leader, or any leader for that matter, is responsible for everything that happens or fails to happen in the organization – EVERYTHING! Understanding responsibility is all encompassing; one must be familiar with:

When I speak of modeling, I’m referring to setting the standard by being the example of the standard. The popular view by those who have not served in the armed forces is the belief that military leaders have an easy task leading others because it is a “do as I say” culture. That would be wrong. The Marines, and the military in general are very much a “do as I do” culture. The pressure for leaders in all walks of life is to understand that they are role models whether they like it or not.

A good rule of thumb is this: If everyone in your organization acted like you, is it acceptable? Those you lead will rarely, if ever, hear what you say. They will see what you do. They will not behave better. Your behavior establishes the standard others will follow.

Check into future blog posts to discover the impacts of Vision, Guiding Principles, Being Resilient and Fair, Firm and Consistent.

One thought on “Being the Leader is Cool – Modeling”